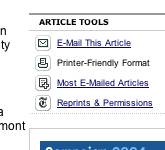 Over the past month or two, I’ve been noticing a little link on larger news organizations’ Web articles, such as that of the New York Times and Christian Science Monitor.

Note the “Reprints and Permissions” link. When you follow it, it takes you to RightsLink, by the Copyright Clearance Center, and it offers you a variety of ways to license the article.

When I first saw this, I was somewhat pleased; it showed that these companies were making a bona fide means of legal use easily available, and it’s pretty technologically savvy, as well; unlike many other industries, they’re not hiding their collective heads in the sand. It looked sort of like a Creative Commons with some financial infrastructure mixed in.

However, digging a bit deeper gave me pause. For example, they have an option to pay for “Informational Use” of an excerpt (of up to 250 words) on a Web site. To me, this seemed to encroach upon fair use; the implicit statement is, “it’s easier to pay us $100 than it is to risk an unfavourable fair use judgement and the associated legal fees, fines and damages.”

Upon reading CCC’s copyright resources, I had a distinct feeling that they were spinning the facts in favour of copyright holders, so I checked with Stanford’s Fair Use site, and found, to my distinct displeasure, that they aren’t (much); fair use is in the eye of the beholder, and while there are guidelines, any dispute will ultimately be decided in court.

As a result, it appears (IANAL) that you can be sued for copyright infringement for something as trivial as quoting someone else’s blog, much less a major media outlet. They may not win in court, but that probably doesn’t matter, if you consider how much it’ll cost you to mount a defence. And considering the ever-expanding interpretations of copyright as well as IP, you’re less and less likely to win that case every day.

That said, the capabilities that technology gives is unbalancing the system just as much if not more than interpretation of the law. For example, we’re probably not that far from a system that compares a Google-like index of Web documents to a corpus of copyrighted documents; if there’s no granted license detected (this could also be automated), you get an RIAA-style call from a lawyer. Likewise, it’s remarkably easy to unintentionally violate a copyright, because of the ease of publishing the Web gives us.

I take a few things away from this. First of all, it’s goodness to explicitly license everything you produce, in unambiguous terms. Large corporations might derive value from making this ambiguous, but the rest of us don’t; it hurts the network effect that enables smaller voices to be heard. I’m in the process of putting creative commons licenses on pretty much everything I do.

Secondly, I’m starting to think that Aaron and others who have seemingly radical views on these matters may have a point; when I went to University, these issues were relatively clear-cut, but technology is enabling those who control information to get much more efficiency out of the system, without giving anything back. This is good for profits and bad for society; if I were in his shoes, I’d be pretty pissed about being handed a world in which everything was metered and licenced down to the last bit of information.

Finally, there are some implications for using potentially copyrighted works when you accept contributions or feedback in places like blogs and other kinds of publications. More on that in a bit.

P.S. If the New York Times would like to sue me for copyright infringement for reproducing an image of their Web site, even though it can be characterised as non-commercial criticism and interpretation of a small, non-central portion of a published, factual work, thus fulfilling all of the tests for fair use, I suppose they will. If that happens, I may be taking donations; stay tuned…