Hi, I’m Mark Nottingham. I currently co-chair the IETF HTTP and QUIC Working Groups, and am a member of the Internet Architecture Board. I usually write here about the Web, protocol design, HTTP, and caching.
Find out more.

Social Security represents a pact between generations—a financial and social commitment among people of all ages. — US Social Security Administration

Although George Bush has caused a brouhaha with his ill-defined plans to reform Social Security, it’s actually part of a larger problem that’s been known about for some time. In a nutshell, demographic shifts (Americans are retiring earlier, living longer and having fewer children) and the rising costs of health and aged care mean that the pact between generations is inherently stacked in favour of those who are old, or who are about to be.

Generational accounting is the notion that a nation’s books shouldn’t be balanced just year-to-year, but should also take into account implicit debt — i.e., all of those promises to take care of people when they get old and sick; in the US, that means Medicare, Medicaid and Social Security.

Another way of looking at it is this; Social Security is thought of as a tax you pay now, and a benefit you’ll receive later. Let’s say you pay $1,000 in taxes towards it, and then you get $1,100 in benefits when you get old, as you were promised by the government. Now, imagine a system where you loan $1,000 to the government (say, by buying a bond), and you redeem it for $1,100 when you retire. What’s different about these financial transactions? Nothing, except that former one isn’t on the government’s books as a debt, while the latter one is. That’s generational accounting.

Laurence Kotlikoff is one of the main thinkers behind generational accounting, and he’s written a book about it called The Coming Generational Storm. It’s an interesting read; although frankly it seems hysterical at first, by the closing chapters the tone seems somewhat justified (although still unnecessarily sensationalistic, but I suppose that’s what passes for “accessibility” in publishing these days).

In a nutshell, the message is: we wuz robbed, but in the future tense. Kotlikoff figures that the current US debt — taking into account future generation’s contributions and the promises made to them — is not a piddling seven trillion dollars, it’s actually somewhere in the neighborhood of 51 trillion dollars. Yup. Social Security is a sizable chunk of that, but it’s actually dwarfed by Medicare, which is essentially structured to hand a blank cheque to doctors and pharmaceutical companies.

Kotlikoff then goes on show how there isn’t any palatable way to fix this problem, which is why US politicians are so shy of talking about it. The “menu of pain” includes skyrocketing taxes and draconian cuts in benefits. Nice pact between the generations you’ve got there, especially when you’ve taken the liberty of taking money from people who haven’t even been born yet.

The last chapters of his book recommend a course of action for any politician that’s suicidal enough to want to address this problem, and advice for individuals in case we can’t find one.

All in all, a fascinating read. I have a problem with some of the places he goes with his assumptions (see Paul Krugman’s review), but the ride is more than worth it, especially considering some of the places it gets you to with a little digging.

Other Ports of Call

One of those interesting places is a reference to a report entitled “ Fiscal and Generational Imbalances”, which he claims was removed from the US FY2004 federal budget right after Paul O’Neill was fired. Apparently, the Bush administration didn’t like the start choices therein being widely known, so they nixed it.

A little Googling turns up much more. The Congressional Budget Office brings us the dryly-titled “ How Pension Financing Affects Returns to Different Generations.” Look inside and you’ll find this illustration of the transfer of wealth among generations due to Social Security (in billions of 2003 dollars); 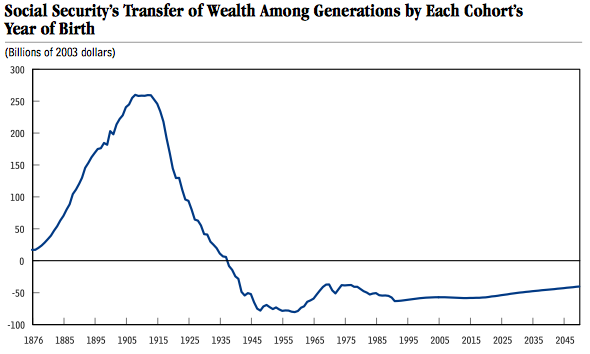 Find your year of birth; where the line is is how much you’re in the red or black because of Social Security. In other words, Grandpa got himself a pretty sweet deal.

The OECD is also interested in this area, recently publishing “ Ageing and Employment Policies: United States.”

Unless policies change, lower growth or absolute falls in the size of the labour force can be expected. — OECD

A more strongly-worded missive from them, on the occasion of the meeting of G8 employment and labour ministers two months ago, was “ Ageing Populations: High Time for Action.”

Finally, the IMF lends its weight to Kotlikoff’s observations, in “ U.S. Fiscal Policies and Priorities for Long-Run Sustainability;”

The Social Security system is under pressure as a result of both the declining fertility rate—which (unlike in many other countries) is somewhat offset by higher immigration—and increases in longevity. As a result, the dependency ratio—the ratio of retirees to the working-age population—is projected to rise from 20 percent at present to around 40 percent by the middle of the century. This implies that payroll tax revenues will decline while social security spending is expected to roughly double as a proportion of GDP. The financial position of the Medicare and Medicaid systems is considerably worse, given the rapid growth of health care costs and the modest share of benefits that is covered by individual contributions. Medicare expenditures are projected to grow almost threefold relative to GDP over the next five decades, and considerable increases are also likely in the case of Medicaid.

Official estimates place the net present value of the programs’ unfunded actuarial liability at around 160 percent of current GDP, if measured over a 75-year horizon. But even these estimates understate the financial problems facing these programs because, in the absence of policy action, the programs will be running large cash flow deficits past this projection horizon

[Our] results suggest that the fiscal imbalance is as high as $47 trillion, nearly 500 percent of current GDP, and that closing this fiscal gap would require an immediate and permanent 60 percent hike in the federal income tax yield, or a 50 percent cut in Social Security and Medicare benefits. The analysis also illustrates that this gap is associated with a severe intergenerational imbalance, with the burden on future generations increasing further if corrective measures are delayed.

After reading all of this and more, my thoughts naturally turned to Australia. What problems will it be facing, generation-wise?

It turns out that, unlike the Americans, the Australian Goverment is being relatively up-front about the issue, perhaps because it’s less extreme there. They recently decided to require — by law — a periodic report of the situation, and the first installment, the Intergenerational Report, forecasts out to 2042, showing that the deficit will be about 5% of GDP; not peanuts, but more manageable that states-side.

This is partially because they don’t have a robbing-peter-to-pay-paul Social Security system, having bitten the proverbial bullet a few decades ago by introducing superannuation with individual accounts, and later by requiring employers to contribute to them. While it often isn’t enough to finance a full retirement, I know I’ll see more of my Australian Super than I ever will from US Social Security. Maybe W is onto something there.

That said, health and aged care looks to be an increasing concern in Australia. Luckily, the Intergenerational Report has spurred a spirited discussion on the topic, including state-level responses, and mention in the 2005-2006 federal budget (released yesterday; Australia’s financial year starts on July 1). In acadamia, there are more critical responses, from “ Death is Inevitable, Why Aren’t Taxes?”, which complains that the Report isn’t broad enough (you can always do more) to “ The Intergenerational Report — Myths and Solutions”, which frankly I don’t know how to take; there are some good points, but they’re so obscured by the authors’ vitriol and obvious distaste for “conventional” economics that I tend to discount it, perhaps too much. There are also some rather predictable self-serving industry responses which I won’t bother linking to.

As it’s probably easy to tell, I’m still synthesizing and researching, but I’ve seen enough to be concerned, but it looks like Australia, at least, won’t completely bury its head in the sand, as a certain superpower seems to be trying to do. What do you think?

Well, one positive aspect to the situation in the US is that our health care system is so obscenely inefficient that we could easily offset an aging population with simple increases in efficiency, at least for the forseeable future (I personally don’t think it makes much sense to think more than a decade or two in the future). That won’t necessarily happen, but who knows, maybe people will eventually realize we’re being robbed blind by our healthcare system and will react.

Yeah, there’s a really interesting graph in the IMF report that compares countries’ life expectancy with how much of GDP they spend on healthcare; guess who spends the most for a so-so life expectancy?

And that probably doesn’t even include the indirect bureaucratic expense of the system, i.e., the significant time spent by employers and healthcare users to navigate a difficult system.

I forgot one important link; the US government did address these issues, in a limited fashion, in the 2004 Budget’s “Analytical Perspectives”; see: http://www.whitehouse.gov/omb/budget/fy2004/pdf/spec.pdf#page=37