Week One in Melbourne

It’s Christmas Eve, and Charlie and I have been on the ground in Melbourne for a week. So far, we’ve got a new mobile phone (sweet), checked in with his school, and looked at a lot of apartments, trying to find somewhere to live for a few months while we house-hunt. Not quite as fast as I’d like, but not too shabby. Meanwhile, most of our possessions are about two months behind us, somewhere between San Francisco and Singapore.

Anitra and Bennet arrive tomorrow morning (after flying all night; they left a few hours ago), and to ease their transition, we’ll be staying in the Westin for a few nights, moving in with relatives for a few days if we don’t have a house settled by then (thanks, Ing and Luke!). We’ll be paying way too much for it, thanks to the Ashes being in town, but we knew that moving countries wouldn’t be cheap.

Overall, it’s been great being back in AU. Charlie gets on with his cousin Brendan like a house on fire, and South Yarra, our intended new address, reminded me so much of Burlingame (with high-end shops and baby stores; we used to call it “Babygame”) that I laughed out loud on the street, which must have caused some stares.

It’s also more jarring than I’d thought it would be; although I lived in Melbourne for about five years in the nineties, both it and I have changed since. Living in California has certainly made us soft, and I can only speculate how growing up here vs. there will affect the kids — something that’s probably best not to think about too much.

Leaving Burlingame turned out to be a lot more difficult than we anticipated; after living somewhere for so long, you tend to put down roots, and we were lucky enough to have made some wonderful friends (many of which showed up at a going away party; thanks Linda and Larry!) and really become part of a community. Hopefully, we’ll see some of those faces down here, and make friends that are just as good here, as well.

We also took amazing institutions like Palcare for granted; Charlie has grown up there (after a good grounding by Vera), and we’ve never once felt bad about leaving him there for the day. The people there are utterly professional and family at the same time. Finding such a good place for Bennet is going to be a challenge.

Anyway, we’ve only been here a week, but California already feels far away. Until we get settled down a bit more, here’s the last picture we took from our old apartment on Bellevue;

And here are Brendan and Charlie on the tram; 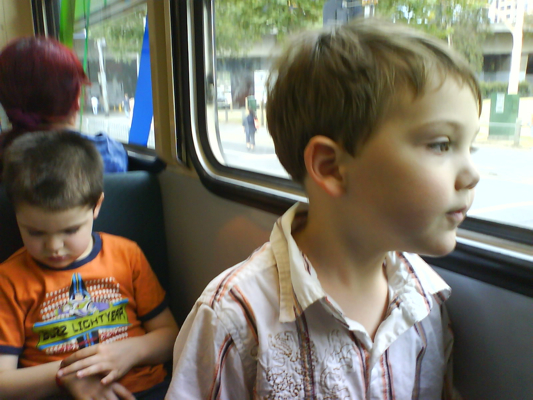